I was initially going to do a review and write up on the base rifle prior to doing anything to it. I think I’ll change that up a bit though, and get it put together before testing extensively, killing two birds with one stone.

That being said, the first thing we’re going to do is get ourselves a base platform to work from, which means getting the factory handguards off of this thing.

The rifle shipped with a decent enough set of standard AR handguards, heatshielded and whatnot, they’d get the job done if that’s all you wanted. But that’s what not we’re going for here.

I wanted to stick with something that is an easy enough install for most readers, but still gives me what I was looking for in this build. Specifically I wanted a free floated tube that was lightweight, didn’t require removal or alteration of the Front Sight Base (on this case, worked with the integrated railed FSB), and VERY specifically in the case of this rifle, it needed to install on the factory barrel nut, rather than use one that’s proprietary, as many do, as Windham uses a barrel nut on the Carbon SRC whose external dimensions are standard, but the threading size is different, part of the reinforcement done on their carbon rifle vs. others in the market. Finally, I wanted one that had integrated QD mounting points.

With those requirements, my best choice was a carbine length (7″) so as to not alter the FSB, and keep the weight down. That’s still plenty of room to get what I need on there. Additionally, I’d be going with a 2-piece, to keep things easy on the install. Lastly, as mentioned, I’d be going with one that would use the OEM barrel nut. I narrowed my search to two options:

Both seemed decent enough options, but just based on price, and a friend’s report of great customer service on Midwest’s part, so that was that. **DISCLAIMER: Installation of this part involves very slight modification to the upper receiver. As I haven’t yet received a yay or nay from Windham Weaponry on whether or not modification in this area is advisable, I have to note that this is done at you own risk.**

Windham Weaponry LIVE: Installing a Free Float Handguard and Changing Tele-stock to A2. Windham Weaponry, Inc. We went LIVE to give you some gunsmithing tips, including how to install a free float handguard and changing a tele-stock to an A2. Windham Weaponry 2017-01-14T14:07:00-05:00 January 10th, 2017 Gunsmithing Tips Read More. I've had a few customers call me since we introduced the Carbon Fiber rifles saying they were trying to install a free float handguard and the barrel nut would not fit on the upper receiver. The barrel nut on our Carbon Fiber rifles has a different.

The install was easy enough, but did require a bit of cutting to remove the aluminum factory Delta Ring.

The ring is aluminum, whereas the spring and barrel nut are steel. Using a Dremel or rotary cutter with a metal cutting disc, it should slice through the Delta ring like butter, without harming the barrel nut below. Pro Tip: Wrap plastic or some other material around the barrel, FSB, and receiver nearby, there *will* be debris, lots and lost of aluminum dust. You don’t want that all over the place on your rifle.

You’ll want to make 2 straight cuts on either side of the Delta ring. It’ll get hot, so be careful. Just cut through, being careful not to mar your receiver, especially being that it’s Carbon Fiber and would easily get cut here. If you’re generating sparks, than you’re too deep, but the sparks should be your disc, not the steel. Be extremely careful, however, to cut on the sides, not the top and bottom, you do *not* want to damage your gas system. 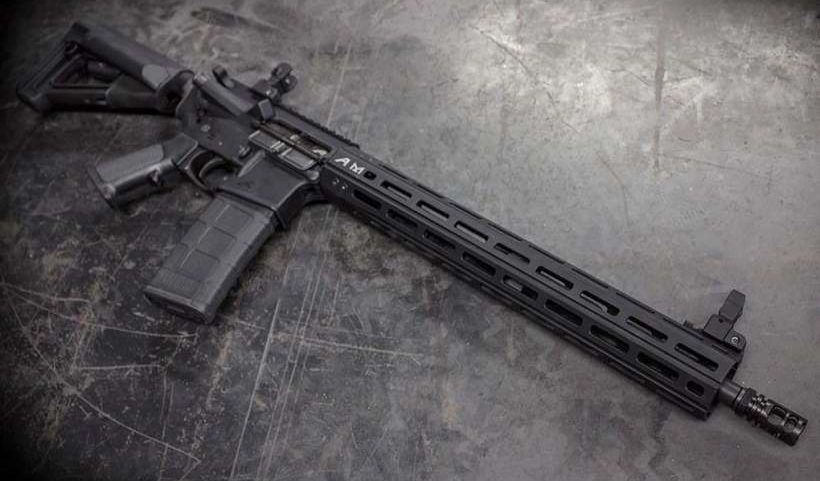 Once you make the cuts, that thing will break off with a pair of pliers with no problem. Next up is removing the spring. Just bend it off of there with the pliers, it wont be “easy” but it’ll come off with a bit of effort.

Alright, so you’re ready to go. *One* minor issue specific to the Carbon SRC- this handguard includes “anti-rotation tabs” meaning it grabs the receiver on either side right below the barrel nut near the pivot pin. The Carbon SRC, being additionally reinforced in certain areas, is a touch more material here than a normal AR. Approx 4mm needs to be removed from the corner in these spots. **Disclaimer: I did stay in touch with Windham and verify a few things prior to this build, when I was initially making making inquires about the barrel nut dimensions. I don’t have a firm answer on whether or not this is advisable, as this area received additional reinforcement. At this time, as I have not heard from Windham one way or the other on whether or not this is advisable. PERFORM THIS AT YOUR OWN RISK.**

Once this is done, its easiest to fit the top first, then the bottom. It won’t *completely* seat together at first, there may be a millimeter-ish gap at the rear, though this should only occur on the Carbon SRC due to the tight fit where we took material off, this likely wouldn’t be the case on a standard AR.

Finally, you’ll want to insert and tighten the set screws, getting them in, then tightening each a little at a time until they wont turn any longer. It would be a good idea to use the included VC-3 Threadmate adhesive.

Alright, we have our base for adding accessories. Next up, lets take care of getting the furniture on there. Stay tuned.

Introduction to the .308 AR Style Rifle

I have always preferred the larger .30 caliber round over the 5.56×45. While the military finds the 5.56 round “adequate” it leaves much to be desired for more applications in the civilian market. For everyday plinking the 5.56×45 (.223 Remington) is fine but if I want to take that caliber for other hunting type purposes I might not legally be able.

The AR-15 style rifle is Legos for the adult world. You can customize it to make some really interesting firearms. With thousands of different products designed for this platform, the possibilities are endless. As each year passes, people are inventing better and better products for the AR.

The issue that I have with the AR platform is the caliber. While it is true that you can build an AR in every caliber known to man, the staple calibers are the ones we want more of.

While the AR-10 style rifles have been around for years, The magazines use to be outrageously expensive until the DPMS/SR-25 style mags started getting manufactured by companies who knew how to make great magazines. This was part of what I saw as the awakening of the .308 AR rifles.

The Quick Detach Points and Keymod

The lower on this rifle comes with two QD sling attachment points located below the charging handle. The Midwest Industries Keymod handguard has 5 QD points located on the left and right-hand sides of the handguard as well as one at the muzzle end of the handguard. This gives the user multiple points and configurations for their needed sling setup. I personally only like single-point slings so this was right for that setup.

This was the first time using the keymod rail system and overall I really like the design. It is simple and easy to install the rail pieces where you want and need them in a very short amount of time.

The trigger is built by Windham Weaponry. They say they take great pains to make the trigger as smooth and crisp as possible but if you are unhappy with their trigger they do offer other replacement triggers from companies like CMC, POF, and Geissele.

The trigger pull is a bit heavier than I like, but I never found myself jerking the trigger or having any other trigger related accuracy problems with the installed trigger.

At first, when I saw the Hogue over-molded grip I wasn’t sure how much I would like it. After getting some heavy range time in all kinds of temperatures, this is now my second favorite grip of all time. With gloves on, this grip wasn’t tacky but when I had sweaty hands in the heat it was.

The stock is the standard 6 position stock with the Windham Weaponry logo. The stock is nothing to write home about. But I like the fact that using a stock like this helps keep the rifle at a very consumer-friendly price.

The 16.5-inch barrel is the perfect length for shooting from the bench, to run and gun, or stalk hunting.

This length is my ideal length for a .308 semi-auto rifle. It keeps the weight down so the rifle is more versatile.

This was my only “problem” with the gun. When the bolt was locked to the rear just tapping the barrel against the rifle rest would send the bolt forward.

This rifle does not come with any sights.

This gun looks like a tank and is built like one too. It can take a beating and still come back for seconds.

In the 500+ rounds, we shot through this gun, we never had a hiccup or anything. It just kept begging to be fed.

We had this rifle on the 25-yard bay out to the 300-yard bay and I always kept 1-3 inch groupings. This is not necessarily an accurate portrayal of what the gun can produce but more of a mark on my shooting abilities.

This rifle is like any other AR style when it comes to cleaning. The 500+ rounds had very little carbon build-up. The barrel stayed relatively clean. I would bet we could have shot another 1000+rounds before it even started slowing down.

For the price, I have not seen a better .308 AR. Flat out, Windham Weaponry knows their sh*t. They know how to build quality rifles at a great consumer price point. They don’t focus on the bells and whistles because they know you are going to want your own bells which is where you can see your savings.

Out of the box, the only thing you need to add is a sight. You can buy .308 rifles for the same price and you are going to end up wanting to replace the other companies’ “quality” parts. Windham Weaponry, from what I have shot and seen are not like that. You might find something you want to change, like the stock or the charging handle. But let’s face it if you are working on a budget, the Windham Weaponry .308 line, as is, will impress you with their quality.

The firearm industry is made up of a lot of really great people who are just trying to make the best and toughest products in the world. I have met the people at Windham Weaponry a few times at SHOT Show and was impressed by the great people. I believe that they are always trying to make something that is going to stand the test of time.